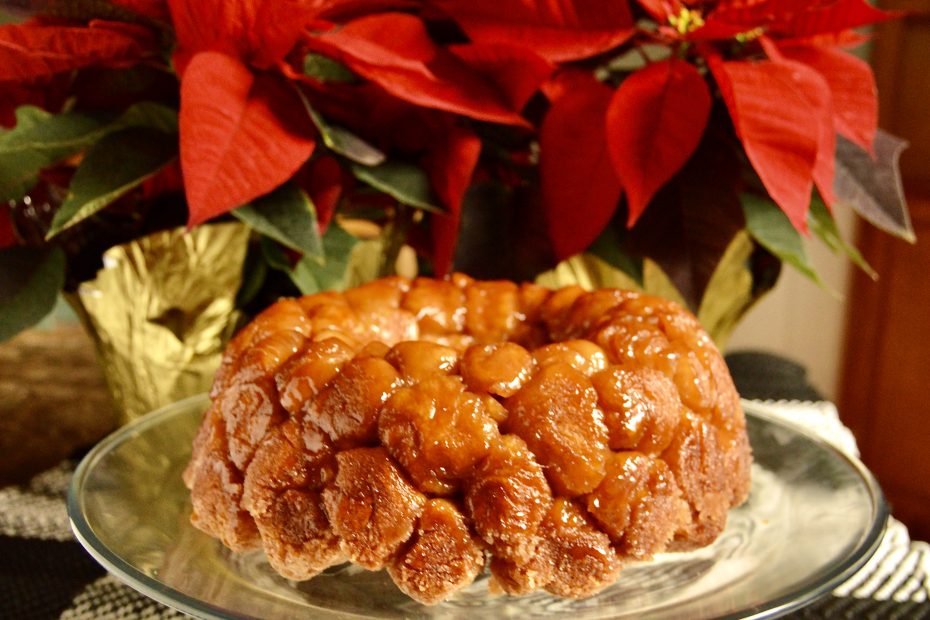 We love Monkey Bread in our house. I make it every December at least three or four times. My mom, sister, and I first made this recipe when I was just a kid. I instantly fell in love with the warm, cinnamon-sugary deliciousness that is Monkey Bread. Although, in our house, we had always called it “Pinch-me-bread”. When I started making it for friends and coworkers, it became apparent that the rest of the world knew this treat as “Monkey Bread”!

All you need to make Monkey Bread, is 2 – 16.3oz cans of Pillsbury biscuits, 1 stick of butter or margarine, 1 teaspoon of cinnamon, 2.5 cups sugar (divided), and 1 teaspoon of vanilla. The buttermilk biscuits used to come in a 4-pack with 7.5oz cans. I always bought them that way, until 2 or 3 years ago when the 4-pack disappeared from the grocery stores. The larger cans work just as well; be sure to cut each biscuit into sixths or eights. To get started, preheat your oven to 350 degrees while you prepare the other parts of the recipe.

I typically start with 1.5 cups of granulated sugar and 1 teaspoon of ground cinnamon, stirred together in a good size Tupperware container with a tight fitting lid.

Once all the biscuits are cut up, roll each piece into a ball. This is a solid arm workout, depending on whether you have helpers!

Toss some of the balled biscuit pieces into your cinnamon sugar mixture. Once the lid is securely placed, I like to give the job of shaking the container to the girls. Just shake it around for a few seconds until all of the dough balls are coated in the cinnamon sugar mixture. This process has to take place in batches, usually 4 or 5 so things don’t get to crowded.

The dough balls will be a nice golden color when they are properly coated.

Arrange your cinnamon-sugar coated dough pieces in the bottom of a non-stick bundt pan. If your pan is non-stick like mine, no need to grease it. Our caramel glaze will do well to keep things from sticking during the baking process.

I typically have this process started earlier in the dough coating process, so we can do our layering efficiently. How easily I can multitask for the glaze, depends on how much help I have with the earlier steps.

Melt 1 stick of butter or margarine on low heat. Next, add 1 cup of granulated sugar, and 1 teaspoon of vanilla.

As you begin stir, the butter and sugar mixture will be fairly thin. Adjust the heat to medium-high.

The glaze will begin to boil and thicken. It is now time to remove from the heat and get ready to drizzle over the first layer of dough balls in our bundt pan.

Just drizzle enough to cover the dough balls in the bottom of the pan, should be 3 or 4 tablespoons. You can eyeball it. Our monkey bread is really starting to come together now! Go ahead and take the glaze off the heat until you have your next layer ready.

Add more of your cinnamon-sugar coated dough balls on top.

Move your glaze pan back to the heat, once it is bubbling again you can drizzle more of the caramel glaze over the top of the second layer. Our pan is getting wider, so it will take a bit more glaze this time.

Again, remove your caramel glaze pan from the heat.

Repeat layering again with the remaining dough balls. I usually end up with barely enough to call it a third layer, but that is OK! The dough is going to rise like crazy in the oven.

Return your caramel glaze back to the heat until it is bubbling again. Finish the preparation process by adding most, or all of your remaining glaze. We just don’t want to have a buttery flood on top. I used all but a couple of tablespoons of my caramel glaze. The picture below shows how your prepped dough in the bundt pan will look:

Bake for 30 minutes at 350 degrees. Insert a toothpick or butter knife to ensure it is done. I almost never have to put it back in for a longer baking time.

Immediately, put a plate or cake stand on top of your baked Monkey Bread pan. Using 2 hands, with oven mitts on, quickly flip your bundt pan onto the plate/cake stand.

Don’t mind the steam! Doing this right away ensures our glaze doesn’t have time to harden in the bottom of the pan. Now gravity will be on our side, and the glaze will run through our Monkey Bread while it is cooling off.

Lift the pan carefully, and let your Monkey Bread begin to cool.

The final product: gooey and sweet on the top and in the middle, with nice crispy crunchy cinnamon-sugar bites on the very bottom. I can’t decide which part I like the best. All I know is, this recipe hits the spot every time!

Delicious Christmas Monkey Bread, serve it warm or at room temperature. Either way, you and your family will just love it.

Monkey Bread is best served the day it is prepared, or 1 day after baking. Monkey bread cannot be prepped and stored in the fridge over night. You will not get good results as the caramel glaze solidifies as it cools off. The biscuits also puff up and the texture completely changes. I have always used Imperial Margarine when I make this recipe. I know some people insist on real butter (which I do for many other recipes). You do what makes you happy, and make it with whichever one you prefer. The margarine has always worked well for me, and that is what we always had in our fridge growing up! 🙂
Keyword Best Monkey Bread, Canned Biscuit recipes, Canned Biscuits, Cinnamon and Sugar, Margarine, Monkey Bread, Pillsubury Biscuits

Like this recipe? Try my Glazed Pumpkin Muffin Recipe next!