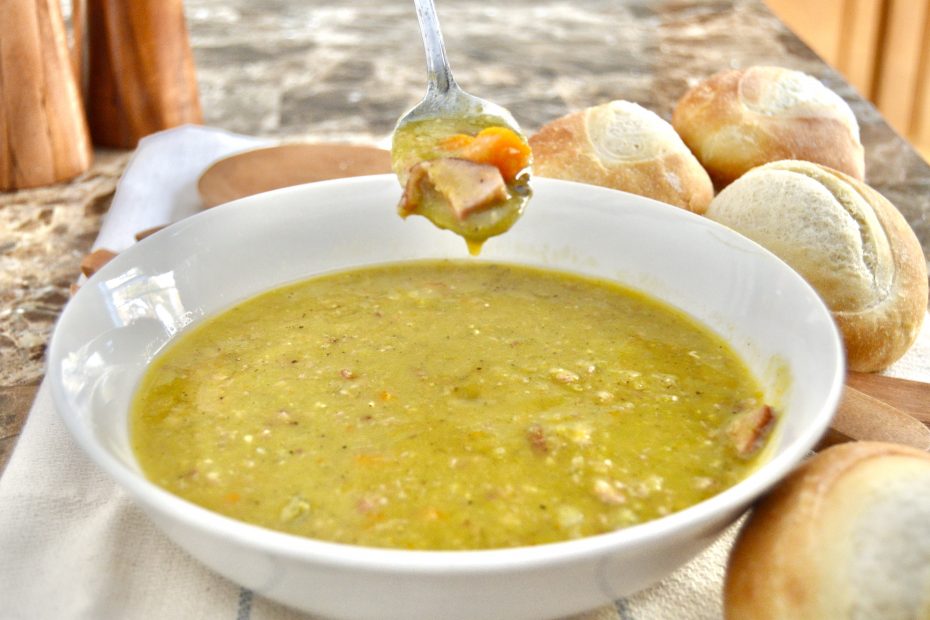 The ultimate “Dump-and-Go” Slow Cooker Recipe – Split Pea Soup! There is no need to saute vegetables or do any additional prep other than getting the ingredients ready. This recipe really couldn’t be easier, and makes a big batch of hearty, comforting soup in a cinch! I had a good amount of leftover ham to use up, but a big ham bone would be another excellent way to add pork bits and flavor into the recipe.

My secret ingredient for Split Pea Soup is Better Than Bouillon Ham Base! It really adds an amazing essence of smoky, salty ham, which elevates the soup and deepens the overall flavor.

The process is simple – just rinse, drain, and pick over the dried peas to ensure only the best of them remain. Other than that, mince the garlic, dice the onion and ham, and throw everything in the slow cooker!

Pour in the chicken stock and water, and stir to combine.

From there, just put on the lid and set the slow cooker on Low for 6-8 hours, or High for 3-4 hours. When the vegetables are tender, and the peas have softened into the broth, the soup is ready.

To give it that classic look and texture, use an immersion blender or traditional blender to puree the soup to your desired consistency. I like to leave several chunks of carrots and ham in the soup for color and texture!

You can definitely garnish each bowl with a few extra pieces of ham, and fresh parsley, as desired.

This Split Pea Soup would be perfect served with slices of my No Knead Artisan Dutch Oven Bread for dipping!

The soup is smooth, but still has tasty chunks of carrot and ham throughout!

Anytime you have leftover ham, this is the recipe to make! This soup can also be made on the stove top, simply saute the onion and garlic in a little olive oil, and add the remaining ingredients. Bring to a low boil, reduce heat to low and simmer for 1 – 1.5 hours. Finish with immersion blender. 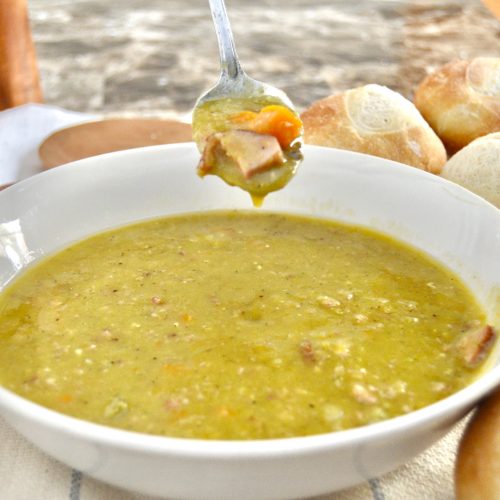 Savory, satisfying Split Pea Soup with Ham – made in a snap in the Slow Cooker! Throw everything in the pot, and go!
Print Recipe Pin Recipe
Course Main Course, Soup
Cuisine American
Servings 8

Like this recipe? Try my Copycat Olive Garden Zuppa Toscana next!